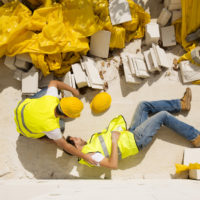 Most people think of construction accidents as matters handled in the realm of workers’ compensation, given that the majority of these mishaps occur when an employee is on the job. However, it is certainly not uncommon for a bystander or non-employee to be injured on a construction site or due to something that occurs on a construction site itself. It can be difficult to determine who might be held liable for this type of injury, so consulting an attorney is generally a good idea.

Construction is by far the most dangerous industry in the United States, with almost 1 in 5 worker deaths happening in construction – more specifically, as a result of the so-called “Fatal Four” as identified by the Occupational Safety & Health Administration (OSHA): falls, being stuck between objects or crushed by objects, electrocutions, and being struck by an object from overhead. While the amount of bystanders or non-employees affected by these common causes is not tracked, it is not unreasonable to estimate that they might also affect other people besides workers.

A lot can happen on a construction site. Other potential accident causes include:

The key word is ‘reasonable’ – if you, for example, leave items lying around on scaffolding, a reasonable person might foresee that they would blow into the street or get knocked off their perch, potentially causing harm to anyone below. If it is foreseeable that your actions might cause harm, they have a good chance of being deemed negligent.

It is true that if a construction worker is injured on the job, they are generally eligible for workers’ compensation, which will then handle their medical bills. However, non-employees and workers injured by a third party (not their employer) do not have access to workers’ compensation, and very often have to bring suit under a theory of negligence. Suing someone under a negligence theory means that you want to show that their conduct in a certain situation was negligent, and because of that negligent conduct, you were harmed.

In some cases, you may also be able to bring suit under a theory of premises liability, which is a theory that holds that a landowner or business owner has a duty to make their premises safe for people who might come there. Under Pennsylvania law, there are three different types of visitors – invitees, licensees, and trespassers. While many bystanders would be considered trespassers on a construction site (and thus, the construction company would not be liable for their injuries as a general rule), there is a special exemption for children that allows recovery in some cases, as children are less likely to understand and appreciate potential dangers.

Can A Pennsylvania Construction Accident Lawyer Help You?

If you have been involved in a construction accident, but you do not have workers’ compensation to fall back on, your medical bills are likely significant. An experienced Scranton construction accident lawyer can help – the Needle Law Firm has handled many of these cases, and we will work hard to ensure you have the best shot to receive the compensation you deserve. Contact us today for a free consultation; we serve Scranton, Stroudsburg, and most of northeastern Pennsylvania.