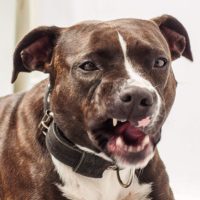 The saying goes that dogs are man’s best friend. However, a Pennsylvania couple may think otherwise after their pitbull attacked them.

The incident happened in the early morning hours of August 25 in Philadelphia. A man was being attacked by his pitbull mix at 5th and Venango streets.

The dog had latched onto the man’s arm tightly. The man’s family members tried to unlatch the dog by hitting it with an aluminum bat, but that only caused the dog to bite harder. Police arrived and shot the dog.

The man and his wife were badly injured in the dog attack. The man suffered several bites to his head, neck, torso, legs, and arms. He also sustained heavy bleeding. The man’s 38-year-old wife suffered a bite on her leg.

It is unknown what prompted the attack. The dog has survived and is currently in the custody of animal control.

What Causes a Dog to Attack?

Dogs can display aggression under various circumstances, such as:

You may have felt a teething puppy nip and bite your hand, but a true dog bite is much more severe. A dog’s teeth and jaws are very powerful. As such, dog bites can cause significant injury to the skin and tissues, such as muscles, ligaments, and tendons. They can also inflict internal wounds, causing damage to the various organs. Even a bite that does not break the skin can cause significant bruising.

Since a dog’s mouth is full of bacteria, infection is also a concern. All bite wounds are considered to be infected, so they should be examined by a doctor promptly. Left untreated, the bacteria in an infected bite wound will cause a localized abscess, pus, or infection.

Dog bites can result in serious injuries. Some people are even killed in dog attacks — even by dogs they know — so safety is key when around dogs.

Bitten by someone else’s dog? Get the legal help you need from Needle Law Firm. We understand how lengthy and costly recovery can be. Let us help you get the compensation you deserve. To schedule a free consultation with our Scranton dog bite lawyers, call our office at (570) 344-1266 or fill out the online form.