Pennsylvania Sees A Number Of New Bus And Truck Accidents 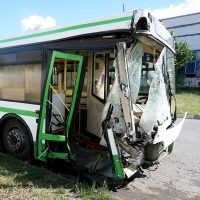 Over the past few days, there have been a startling number of truck and bus accidents in Pennsylvania. In some cases, these accidents have led to serious injuries. In other cases, people have died. Some of the deceased victims were as young as 14 years old. It goes without saying that the potential for serious injury can be much higher when heavy vehicles such as buses and semi-trucks collide. But how can we stop this pattern of destruction, and what is the state government doing to prevent these accidents?

In truth, the government of Pennsylvania is doing very little. New semi-truck and bus accidents occur on an almost daily basis in the Keystone State, and they show no signs of slowing down. Government officials can talk all they want about new safety measures, but this talk is ultimately meaningless if accidents continue to happen. For injured victims, the only option remaining is to get in touch with a qualified, experienced personal injury attorney in Pennsylvania.

On November 4th of 2021, it was reported that a 14-year-old girl had lost her life in a school bus accident in Butler County. Five other children were injured in the crash. The accident occurred when the school bus crashed into a tractor-trailer on I-79, rear-ending the heavy commercial vehicle and throwing several children forward out of their seats.

On November 2nd, it was reported that an individual had been killed after a semi-truck collided with a pickup truck in Monroe Township, Wyoming County. It was not clear whether the semi-truck driver or the other motorist had lost their life.

Back in January 2020, a FedEx driver crashed his semi-truck into an overturned tour bus, killing five people and injuring 14. At the time, he was wearing noise-canceling headphones. On October 26th of 2021, it was determined that his decision to wear these headphones constituted negligence as part of a lawsuit filed against him. Dashcam video shows the trucker wearing the headphones, and they prevented him from hearing his vehicle’s built-in alarm system.

On November 1st, it was reported that a man had been killed after colliding with a dump truck in Caernarvon Township. This individual struck the rear of the dump truck, surviving long enough to be transported to a nearby hospital but later dying of his wounds.

Three heavy commercial vehicles, including a tractor-trailer and three tri-axle trucks, collided on Interstate 70 on October 28th, 2021, causing massive delays. One of the drivers became trapped inside of his vehicle, but first responders managed to pull him out. The semi-truck was carrying coal at the time of the crash.

Mother and Daughters Rescued After Collision with Tractor-Trailer

On November 1st, it was reported that a mother and her two daughters had narrowly escaped tragedy after a collision with a semi-truck in Philadelphia. First responders managed to pull the family out of their sedan, and they were quickly taken to a nearby hospital. One of the children was reported to be in critical condition.

For help with your case, contact the skilled Scranton car accident lawyers at Needle Law Firm. We understand how traumatic and serious a semi-truck accident or a bus crash can be. With our help, you can file a personal injury lawsuit and strive for an adequate, fair settlement. This can help you cover a wide range of expenses, such as medical costs, missed wages, and much more. Get in touch today, and we can immediately start working on an effective action plan together.

By Needle Law Firm | Posted on January 12, 2022
« Filing A Lawsuit For A Faulty Hip Implant In Pennsylvania
Why Awareness Plays Such A Critical Role In Personal Injury Cases »