Trapped Inside A Burning Car: Can You Sue? 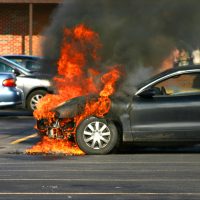 Being trapped inside a burning car is one of the worst fates imaginable. Unfortunately, this is a fairly common occurrence. Vehicles are laden with flammable materials, such as fuel and electric batteries. Crashes can easily ignite these materials, facing occupants with potentially fatal or disfiguring flames. Often, car accident victims are already rendered disabled or unconscious by the time the fires erupt. Sometimes, they cannot escape the wreckage of their vehicles due to various factors. But what happens if the design of the car prevents you from exiting, keeping you trapped inside? Can you sue?

We know that it’s possible to sue manufacturers for fiery crashes. On November 29th, it was reported that a Pennsylvania woman had sued Mazda Motor Corp. in relation to a 2020 crash near Jimmy Stewart Airport in Indiana County. This woman alleged that her vehicle was “unsafe, carelessly designed, and [of a] defective design,” causing her to become trapped inside the vehicle as it burned. The lawsuit notes that she has no way to escape the third-degree burns that now cover over 70% of her body. She sought damages of over $50,000.

Eventually, she agreed to dismiss her claim for punitive damages “without prejudice.” But this doesn’t mean that the entire lawsuit has been dismissed. She is still moving ahead with the discovery phase, and she will have the opportunity to refile for punitive damages after this pre-trial process is complete.

The above lawsuit doesn’t mention a specific design or manufacturing flaw that left the plaintiff trapped inside the vehicle, but we have seen valid concerns raised with other cars. One of the most notable alleged design flaws is Tesla’s door handles, which led to at least one other lawsuit in 2021. These handles are famously high-tech – so high-tech, in fact, that they are very difficult to open from the outside. These handles are retractable – remaining flush with the side of the vehicle until the owner activates them. This means that would-be rescuers often find it very difficult to open these doors and pull victims out of burning wrecks. In the aforementioned lawsuit, the plaintiff was allegedly “pushing the door frantically and it would not engage. He was able to push the button again and lean against the door very hard and that’s when it opened up.”

Where Can I Find a Qualified Personal Injury Attorney in Pennsylvania?

If you’ve been searching for a qualified, experienced Scranton personal injury attorney, look no further than the Needle Law Firm. We know that there may be numerous negligent parties involved in auto injuries or deaths. Sometimes, the car manufacturers design their vehicles in such a way that makes it almost impossible to escape flames after a crash. If you’d like to explore your legal options for holding these manufacturers accountable, be sure to book your consultation with us at your earliest advantage. With our help, you can gain compensation for medical expenses, missed wages, and the psychological damages associated with burn injuries.